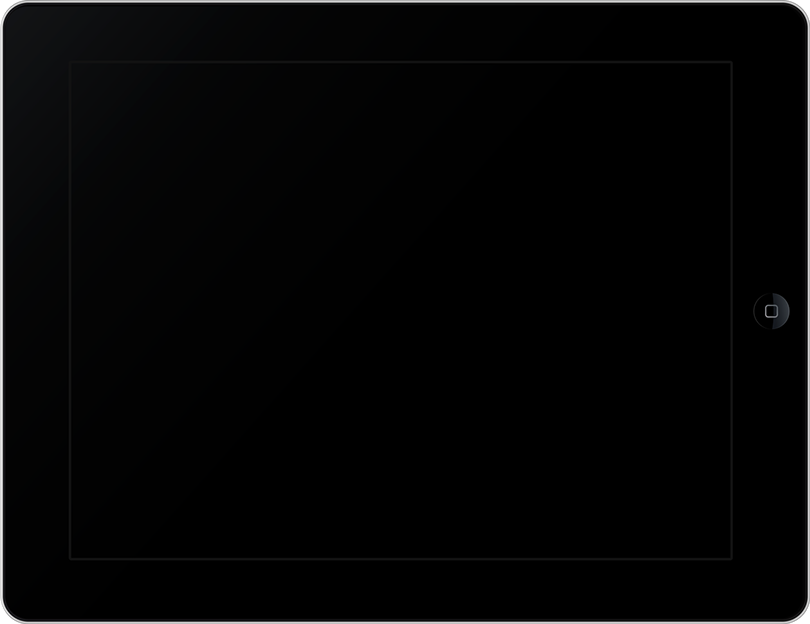 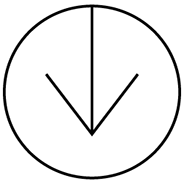 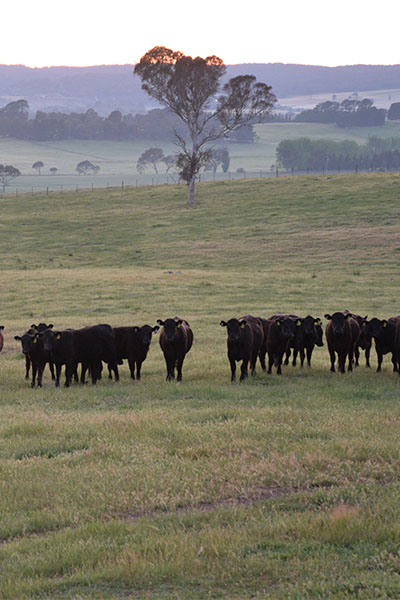 The University of Sydney

As UAV Technology is becoming increasingly more advanced and

autonomous, we will soon see their application in many areas of our daily lives. Due to their high precision and complex controls, the future of interacting with drones is not the type of joystick remote control interface that current hobby UAV’s offer. Instead, we will be interacting with drone through pre-specified commands delivered via mobile apps. The focus of the task in this project was to develop a mobile application that connects with a drone specifically designed to support people in a particular context or activity. As a designer, our task was then to understand the market, the prospective users and their needs, to then propose and design a solution for a mobile app to be able to control a UAV in a chosen scenario. However, we were also encouraged to think of other ways of simulating the behaviour of the drone in response to commands triggered via the mobile app. Our chosen scenario for the task was; Animal owners everywhere know the importance of caring for their creatures both big or small. This is an application proposal that will aim to assist in the caring of animals on commercial properties. Utilising UAV’s, the application would be able to track livestock locations, health conditions, eating habits and potential threats. This would be all fed back in real-time to the owners or cares allowing for an on the go analytical monitoring of their livestock.

The Outcome we decided upon was to develop an observation and welfare application that through the use of the Flying Farm drone's. The farmer is able to detect the location and health conditions of his or her animals and then receive an analysis from the drone’s observation, in a report format in which the farmer can view at any time. With the possible quick observation collected from the pre programmed UAV, the farmer is able to increase productivity and spend his or her day on other tasks while the drone is at work. The advantages to using a UAV is the speed/ efficiency in travelling, distance covered and lack of obstacles encountered in the air. Our users initially deemed these tasks as long and tiresome but also essential to production, through this improvement farmer will not only be able to increase their ROI but their own wellbeing and safety while on their property.

Flying Farm was design to observe and report the health, location, and conditions of livestock on commercial properties. This solution was designed to help the ROI for the farmer as well as operation safety. Flying farm improves these traditions processes that are deemed time consuming and physically demanding. The App, incorporates all these aspects while providing a user friendly and easy to use interface to get on with everyday tasks

The complete Flying Farm service comes with your very own set up from our employees that will upload your farm specs onto the app. Flying Farm Connect holds key features such as; Thermal imaging, Geo fences, animal tracking, Live drone camera views, map drone planning for an autonomous UAV and Results collated from the drone about the health of the animals. This system should allow the farmer to increase his own ROI and increase the productivity on his property. 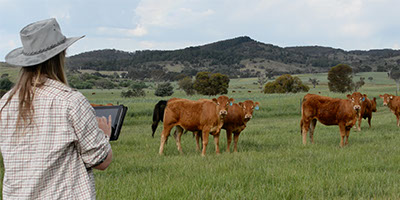 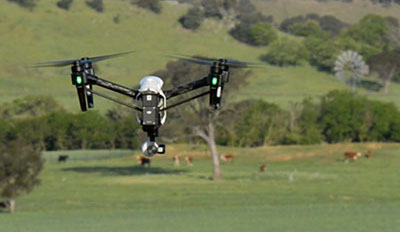 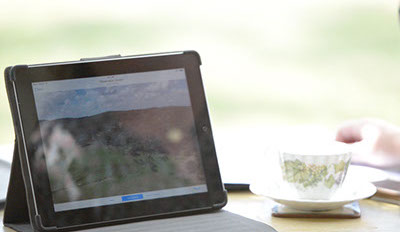 To create Flying Farm we followed a User Centered Design process, creating  a range of iterative prototypes which were continually evaluated and assessed by means of usability testing from experts in these fields.

The Making of Flying Farm

The reason we chose to implement UAV’s into Australian agriculture was to assist in the improvement of production for future farming. This is because the global population expected to rise from around 7.3 billion now to 9.1 billion by 2050. The United Nations food and agriculture organisation, estimates that food production worldwide will need to increase by 70% if we want to maintain this lifestyle. As well as this Australia produces 4% of the world’s beef supply, and are the third largest beef exporter in the world (USDA 2012). Meaning the gross value of Australian cattle and calf production alone (including live cattle exports) is estimated at $7.4 billion (ABARES 2012-13). This is why it is so important for Australia to support this industry with the newest technologies and development as it is such a big commodity for Australia’s GDP. Our challenge was; how do we improve the traditional practices through the implementation of an app that autonomously commands a UAV to assist in the production of a commercial property. The decision on creating a mobile/table application rather than desktop software was founded upon our user and how he or she is always on the go. Being a farmer entails long hours out in the paddock observing and checking their commodities’. This is why a non-desktop solution was deemed more suitable for the life style. From here the major challenge was refinement to improving one process at a time through the development of this application. 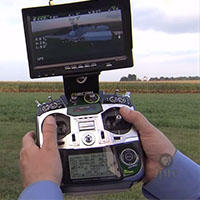 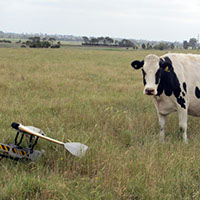 Roger lives on a large scale farm (>10000 Acer) with his wife and 2 young boys. He has lived on the farm all his life and it was passed down to him when his father passed away. The farm has been in his family for several generations and he now has acquired 2 new farms as his business is booming. He constantly is concerned about the future of his farm as all processes are very physically demanding and time consuming. Roger would love to be able to spend more time with his young kids but finds it hard, as he spends 7 hours a day working on the farm. At every safe opportunity Roger tries to take his children out onto the farm to teach them the basics farming and where the food on their plates comes from. The main production on his farm is cattle and sheep, the only crops grown are for the animals to eat. As much as Roger loves sticking to things that work/ traditional processes, if he can see a positive ROI opportunity he would be willing to implement it on his farm. 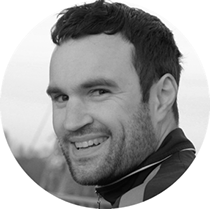 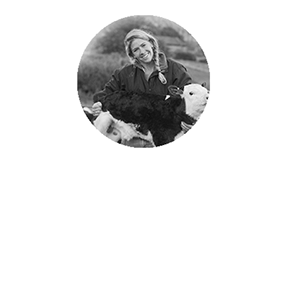 Wool Farmer. Works long days sheering/ protecting sheep, he is constantly repairing fences where predators have gotten in.  Not a lot of time to left to check sheep

Runs a large scale feedlot. Spend a lot of time checking the health of her cattle, to be produced into the highest quality beef in Australia.

Separate hand drawn sketching were generated to create a range of ideas and solutions based on our initial research. By separating we were able to explore a two of different approaches for a solution to solve the defined problem. During this stage we also undertook the first round of usability testing by sharing and evaluating our different solutions. 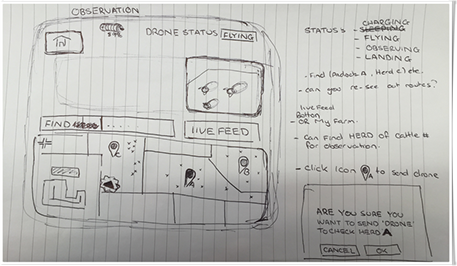 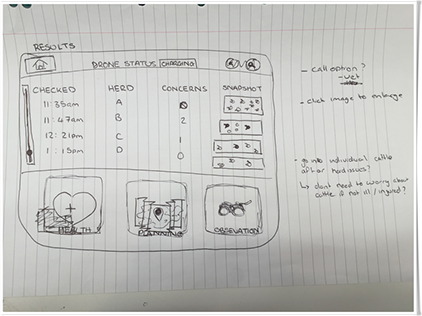 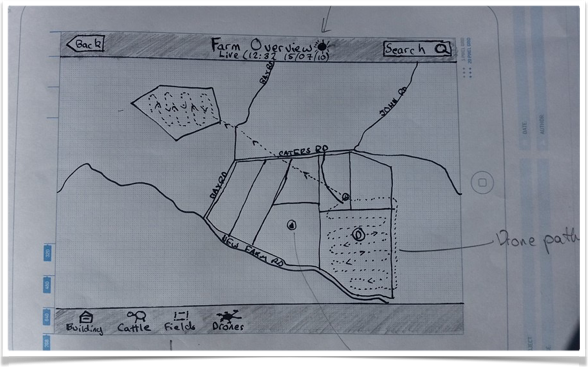 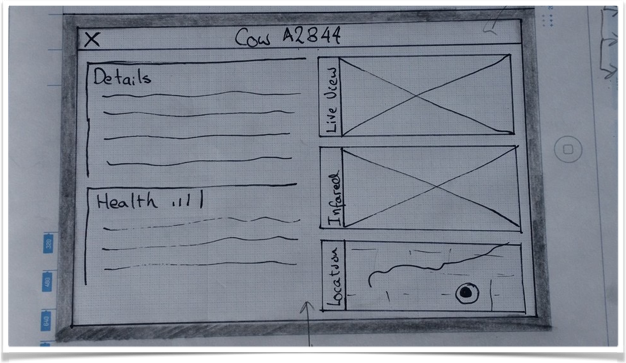 After analysis and discussion of initial ideas a single set of sketches were drawn up and refined to represent a possible final solution. 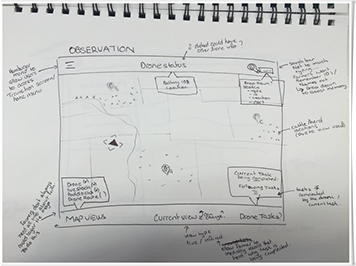 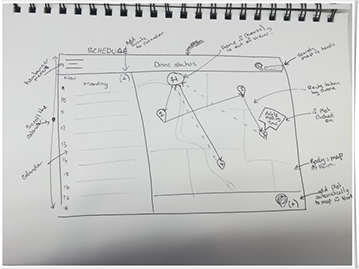 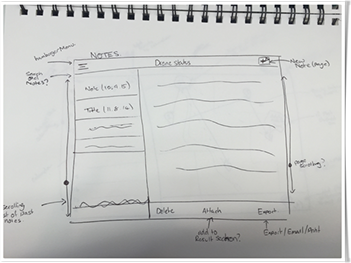 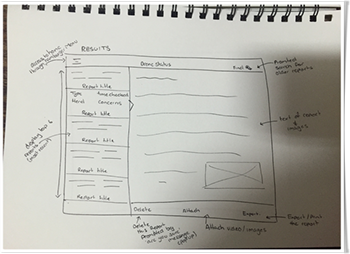 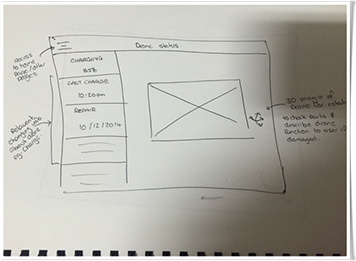 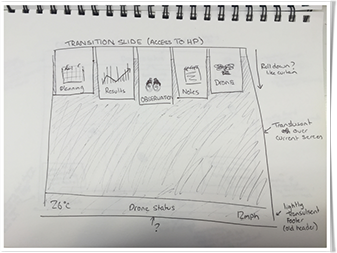 Using Keynote a rough set of visual mockups were created to enable a rapid prototypes to be made and remade with varying design features.

Different Home/Navigation Menu examples, showing the ability to quickly change and iterate the design based on usability testing.

Using Adobe Illustrator a set of size accurate wireframes were generated.  These were then imported into POPAPP to create an interactive wireframe solution.

Click within the iPad to explore the various screens of Flying Farm.

(Click-able buttons are highlighted in green when selected)

Using Sketch a series of  Visual mockups were created to represent the final solution. While creating the final mockups a determined set of font variations were used to keep a clear, readable, and consistent look and feel to the App. The use of  “Helvetica Neue” was based on the “iOS Human Interface Guidelines” recommendation to alight the app experience with the general iOS experience. This helped to create a familiar iOS feel throughout the App. This was also translated across into the App button icons which follow a similar clear iOS feel. 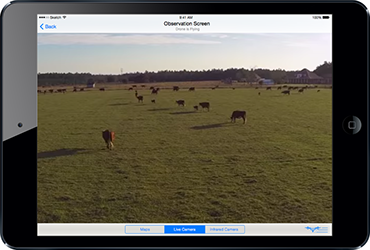 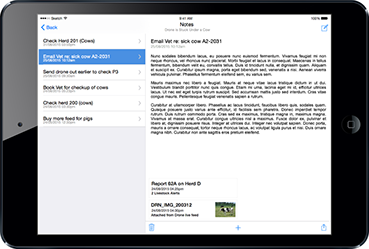 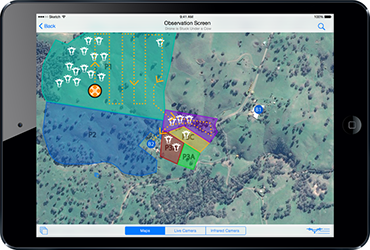 Click within the iPad to explore the various screens of Flying Farm.

(Click-able buttons are highlighted in green when selected)

Taking the graphics and screens generated in Sketch, using Pixate the App was able to be make into an interactive prototype. This incorporated clickable buttons, screen animations and menu pop ups and overlays. Through this a true to life experience was able to be created without the need for high levels of back end coding and software engineering.

Due to the positive usability testing and results obtained, we were able to quickly and efficiently dive into our development process. Doing the parallel usability testing between ourselves initially; worked well in our favour as we were able to quickly put our individual solutions onto paper and test them. From here everything ran relatively smoothly and the most challenging part was the usability testing and refinement of our designs. We feel we were able to challenge our initial skills too new levels with the use of industry software such as; POP, Sketch and Pixate. The use of this software enabled us to take the project to an industry standard not seen by many university projects. It also enabled us to develop a holistic experience and system that could be pitched to a kick-starter community for further development. As well as this we can see a possible collaboration opportunity arising with Usyd aerospace engineering and their development of an autonomous UAV system and power line charging which could be easily combined with our system. We would also like to evolve the app into looking at movement and protection of animals and crop maintenance.

We are both excited to see where this project could develop in the future, as we have completed a submission into the 2015 AIMIA Awards and there is also increasing industry interest and investment for major developments and ideas into this area.